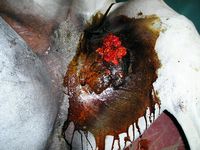 The doctors at Equine Medical Service were requested to evaluate and diagnose an eleven-year-old mare for lumps and ulcerations around the horses mammary glands and inguinal area. A portion of tissue was taken and the masses were diagnosed as sarcoid tissue. The horse was then scheduled for surgery to remove the masses and treat the tumor margins with a chemotherapeutic drug after the wound has healed. The area was treated three times with a chemotherapeutic drug around the wound site, 3 weeks after the surgery and then again at 3 weeks intervals. After the second injection the tumors were treated topically with a different chemotherapeutic drug in the form of a paste.

Four months after the last chemotherapeutic drug injection the mare was again presented for the re-growth of the tumors in the same sites. Surgery was again performed to remove the masses and then to freeze the areas as to destroy the cancerous cells that may be left around the margins. The treatment was slightly changed to include immune stimulant drugs and the reapplication of the chemotherapeutic drug in the paste form. The mare has not had any tumor re-growth in the past 10 months.

The previous case demonstrates the difficulty in treating sarcoids and finding the right combination of therapies to provide resolution for the problem.

Sarcoids usually appear as large, cauliflower like warts. They are the most common type of tumor in horses. The specific cause of sarcoids is not known, but a virus is thought to be involved. Occasionally a group of horses has a high incidence of sarcoids, but sarcoids are not contagious. Sarcoids may occur at sites of previous trauma, possibly allowing a causative virus to grow at the injured site. Heredity may also play a role. Certain individual horse lines or breeds may have a higher incidence of sarcoids. The tumors may respond to vaccines and other immunostimulants.

Sarcoids can have quite large, flat bases and can occur in areas that are difficult to treat, such as on the ears, around the eyes, and on the coronet. Those occurring over muscular areas are easier to treat. There are many different treatments for sarcoids, but they often recur after treatment. Recurrence depends on how long the sarcoid has existed, and the number and size of the sarcoid(s). After previous removal, they are more resistant to complete removal. Keeping your horse in a clean environment and reducing insect contact is important.