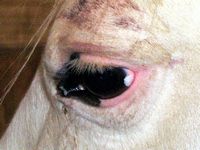 The doctors at Equine Medical Service were requested to evaluate and diagnose a four-year-old stallion for a mass on his left eye. The mass was removed and submitted for microscopic diagnosis of the tissue. The horse was diagnosed with squamous-cell carcinoma on the conjunctiva of his eye and the entire tumor had been removed. The tumor had previously been surgically removed three months earlier. About two months later the horses’ eye was re-evaluated and had a similar mass growing in the same area of the eye. The mass was again removed although the entire mass was not resectable due to the tumor starting to progress into the corneal tissue. After three more months the tumor was again enlarging. Since general surgical removal alone was not providing a favorable response, an innovative therapeutic plan was considered. This treatment consisted of placing a lavage system to continuously medicate the eye with a low level chemotherapeutic drug over a 6 week period. After several months, the tumor “fell off” the horses’ eye. To this date there has not been any recurrences of the tumor and the horse is continuously kept with a fly mask on to prevent ultraviolet rays from the eye.

Squamous cell carcinoma is a common tumor of skin cells, generally occurring at the junction of the skin and mucous membranes of the eyelids, vulva, prepuce and penis. Exposure of the white skin in these areas to ultraviolet rays (sunlight) is thought to be a major factor in development of these tumors. Irritation from smegma and dirt accumulation in the sheath of males has also been considered a factor.

The appearance of squamous cell carcinomas varies from a slow healing ulcer to a cauliflower shaped tumor. Both types of tumor bleed easily. The tumor can be quite invasive, invading the underlying subcutaneous tissues and sometimes, even bone. They can spread to the local lymph nodes but usually not to internal organs.