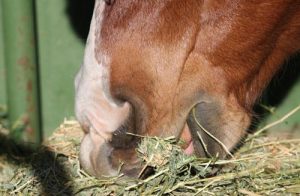 Most people have strong opinions of what products they use or brands they buy or where they shop. Either you use a Windows or Apple computer, drink Pepsi or Coke, shop at King Soopers or Safeway, or ride English or western, but nothing might be as controversial as whether to feed your horse grass or alfalfa hay! You may think I have lost my mind treading into this mine field of controversy, but read on, I plan on giving the good and the bad of both and dispelling a couple of medical myths concerning their use.

We typically feed horses hay year round unless we are lucky enough to have pasture available. Even at that we still need to feed hay when the pasture is not growing or when eaten down. We typically feed our horses what we were taught to be horse hay, as well as the availability of that type of hay. In the midwest and eastern part of the United States, grass hay is readily available whereas alfalfa is not. In the south-western and western United States, grass hay is hard to find and alfalfa is the predominant hay. Some owners have always fed alfalfa or grass and continue to do so. So which one is right for your horse? As with a lot of questions like that, it depends! It depends on your horses, their health status, their breed, and the amount of exercise they perform.

What does your horse need? The horse needs three major nutrients, and a certain amount of bulk continuously in their digestive system. The first nutrient your horse needs is energy. Energy is what keeps your horse going. It is the nutrient required in the greatest amount. When we look at feed values that is fed to a horse, we look at digestible energy (DE) and it is measured in megacalories (Mcal). The second nutrient your horse needs is protein. In feed values it is a measurement of all protein in the feed known as Crude Protein (CP). Protein is a major component of all vital organs, muscle, hair skin, milk and enzymes. The third important nutrient is calcium, (Ca). Calcium is important for bones and teeth formation, nerve conduction, muscle contractions and heart regulation. Calcium needs to be balanced with phosphorous (P) in a ratio of calcium:phosphorous of about 1:1 to 2:1. It can be as high as 5:1, but never with a higher P amount than Ca. (There are other important nutrients that the horse needs, but the difference is not a factor when comparing these two hays.) The horse has evolved to have food continuously in the digestive tract and will consume about 1-2% of their body weight per day in food. That means the horse is best suited to graze thorough out the day, either on pasture or hay and the average 1000 pound horse will consume about 10-20 pounds of food a day.

Let’s compare grass versus alfalfa hay. The data given is in general terms, because 1) crops of hay can vary from field to field, 2) vary by cutting (when the hay is cut during the growing season, 1st cutting, 2nd cutting, etc.), 3) the stage of growth of the plants, and 4) how the hay is processed (curing time, rained on, etc.). There are three main nutrients that differentiate grass from alfalfa hay. Energy, protein, and calcium levels for most grass and alfalfa hay tested by Equi-Analytic Lab in Ithaca NY in the last 14 years are listed below.

All of these levels are higher in alfalfa hay versus grass hay. What does that mean for the average 1000 pound horse not working? We will feed average grass and alfalfa hay at 17.5 lbs. per day

All the nutrients of the alfalfa hay are in excess of what that horse needs, but with the Ca:P ratio within acceptable limits when compared to being fed the same amount of grass hay. The extra calories from the alfalfa will be converted to fat, the extra protein will be converted to ammonia and excreted through the kidneys into the urine, and the extra calcium will either not be absorbed and/or be excreted through the kidneys into the urine. If this horse was to continue to be fed this type of hay at this amount, he would become overweight and produce a lot of ammonia smelling urine.

Let’s see what this gelding’s nutritional requirements are when he is put into light work.

Being fed the same amount of hay the alfalfa hay is still more than enough, but the grass hay will not cover the increased demand for energy. With being fed grass hay, the horse now needs to be fed a more concentrated feed grain supplement to meet his energy needs or more hay.

Let’s switch to a mare that has just had a foal and is in early lactation. This mare needs to eat enough to not only meet her basic needs, but also those of her newborn foal.

From the above example the quantity of either hay will not meet her DE needs. She will need an increased amount of the hay and supplemented with a grain mix.

In the previous examples we looked at healthy horses with different energy level needs. Now let’s look at where the different hays may be better when a horse is ill. There are certain diseases and conditions that alfalfa hay is better for the ill horse and some that are inadvisable to feed. Since alfalfa provides a high amount of energy and crude protein, conditions like small and large intestine resections and large colon impactions feeding alfalfa is a better choice. The opposite is true for conditions like laminitis, kidney disease, or liver disease where it would not be good to feed alfalfa due to the increased energy, proteins and calcium levels in the hay. While alfalfa is not recommended to be fed for these conditions, feeding alfalfa alone has not been found to cause kidney or liver damage or failure.
The main differences between alfalfa and grass hays are primarily in the increased amount of energy, crude protein and calcium provided. While most horses do well and thrive on a grass hay diet, other horses with different needs and medical conditions are better suited to being fed a diet of grass/alfalfa mix, or an exclusively all alfalfa.